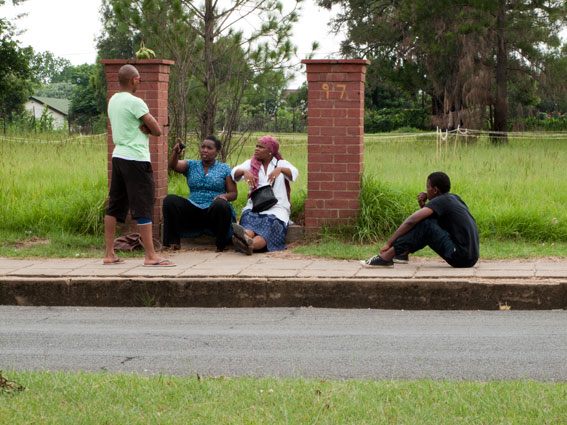 When we first arrived in Dundee we were amazed at how many gate posts remained at the entrances to empty properties around the town. One of which was 97 Mackenzie Street, situated in the middle of a Dundee suburb. All that remains on the site are two gate-posts (minus gate) and the foundations of a structure.

We began asking locals, passer-bys and neighbours what they knew of the house: Who had lived there? What had happened to the building? Were there any plans to build on the property in the near future. Details were sketchy, what we did manage to learn is that Public Works in Ladysmith own the property and hires two ladies to trim back the grass with machetes.

The only record of the building we could find in the archives was an aerial photograph of the neighbourhood taken in 1944. Who had previously lived there and what happened to the home- like so much of history in this region– is open to speculation. 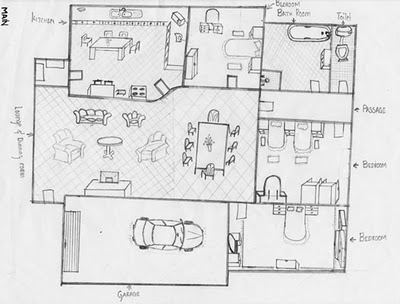 With our collage workshop participants, we set about imagining our own version of what the building might have looked like and what may have happened to it. We initiated the project by first drawing maps of the foundations of our own homes, this followed by a trip to the site where we began to trace the foundations of the Mckenzie house.

We walked the brick remains and imagined how it may have looked all those years back. Each participant was encouraged to find a room and re-enact an activity that might have taken place there. Such activities called on a range of mime and gesture (opening and closing imaginary drawers and doors) causing passerby’s to stop and observe the absurd goings on.

Back in the Umzinyathi Education Centre we began sketching foundation maps of the Mackenzie house and each participant was asked to write a fictional narrative around the property and imagine what had happened to it. Stories involved lighting strikes, spooks, fires and bulldozers. A mound of earth under a tree in the garden was said by one kid to have been the grave of a murdered resident.

The Mackenzie site is situated along the walking route to and from Sibongile. The pavement sees a steady stream of foot traffic. For the second part of the project we decided to call on the passing pedestrians, using our team of kids and the many lessons we had learned in the collage workshops to help imagine a future of this property. 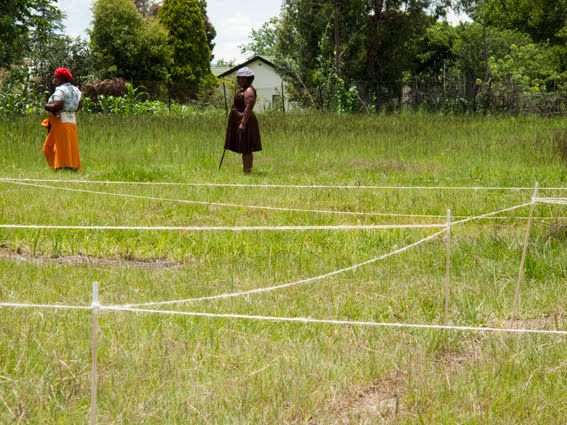 On a Wednesday morning, we set up a large trestle table on the pavement, in front of the Mackenzie gate posts. Our co-collaborator Bongikosi Ngobese headed up the intervention with support from energetic young workshop members.

To activate and create interest in the site, Vaughn and volunteers set about marking the house foundations with chalk-lime and then later with poles and string.

On the pavement table, we spread out hundreds of cut- up images: pieces of Dundee houses and architecture (recent and old) which included windows, doorways, rooftops, chimneys etc.

Passer-bys were asked to stop and look at the neglected lot and imagine what building or facility they would like to see built there. Suggestions ranged from clinics, orphanages, taxi- ranks, churches, mines, temples, housing complexes and colleges.

Each participant was then asked to use the collage pieces to create the type of building or facility they envisioned. This resulted in a range of architectural styles (assembled from old and new pieces of Dundee). Each collage was photographed and subsequently animated for a projected evening performance on a screen erected over the house foundations on the site. 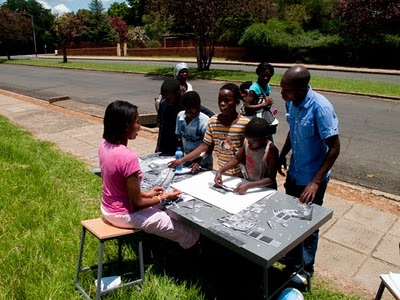 A second improvised performance/ re-enactment at the Mackenzie Site was undertaken this last weekend with performers from the Siwela Sonke dance company. Using our demarcated string foundations as their performing space and employing a few costumes and props which included plastic stools, a radio, wine glasses, an umbrella and washing basket the performers set about inhabiting the non-existent house. 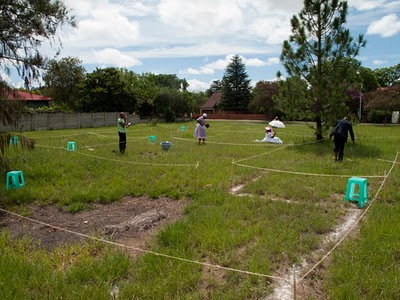 A demanding housewife (Neliswa Rushualang ) in a wedding dress and Victorian tea-party hat barked orders at her long-suffering domestic worker (Ntombikayise Gasa) who attempted to clean, wash, vacuum and dust the property while seeing to her Madame’s every demand.

The woman’s son (Mxolisa Nkomode) slouched in front of the telly while fellow resident (Sibusiso Gantsa) spent the afternoon partying up a storm with radio blaring at full volume.

The two-hour long re-enactment saw pedestrians stopping to steal glimpses through the imaginary walls. Cars, reversed and pulled-over, concerned neighbours peered over fences (horrified that this delusional family might turn out to be their new neighbours), while children returning from school gathered in giggling clumps to watch the suburban drama unfold.

97 MacKenzie Street – A Day in the Life from vaughn sadie on Vimeo.

One thought on “DUNDEE : 97 McKenzie Street”